#BJJLife (Part 1) - Getting to Know Yourself

Darby: I'm here at the coffee shop with Ruby. She is a student at Team Haanpaa Martial Arts and has been a Jiu-Jitsu enthusiast for the last 9 months. We've been wanting to do this blog series for a little while. I just figured now's as good a time as any. She's going to ask me a couple questions about jiu jitsu, self-defense, life, martial arts - pretty much things that I hear every week - and feel like we could benefit from some dialog on. So if you are reading this join the conversation. put your two cents in in the comments. Ruby, It's all up to you.

Ruby: Okay. Some people say that jiu jitsu saved their life. How do you feel about that, and did it save your life?

Darby: Like that, okay. For me, did jiu jitsu save my life? I'm going to say jiu jitsu changed my life for the better, for sure. However, I don't believe that my life would be lost without it. I know that for some people, that's not the case. Some people, literally without jiu jitsu, they might be dead. You know what I mean? Because it was such a profound positive impact on their lives, they've been forever changed. I can think of a handful of people like that, that fit that description. Really, I think what that comes down to is not necessarily jiu jitsu, the art itself, but what comes with that. The people that come with that, the community that comes with that, the discipline and camaraderie, the lineage; all of it all together can have a profound impact on somebody's life.

For me, maybe I wouldn't say that jiu jitsu saved my life, but if I really think about it, I think the relationships that I've had through jiu jitsu may have saved my life in some ways. My coach, Jeff Curran, he's been a huge impact on my life, a positive mentor, [and] a friend. At a time in my life, when I started training, I was a teenager and we had all sorts of life issues at that point. Without having his influence and his direction in my life and that anchor, I think I probably would have gotten into some crazy stuff, made some crazy bad decisions. I think I made bad enough decisions on my own. I guess, with jiu jitsu, I think without that influence and without that anchor, without having to be disciplined enough to show up and train, without being disciplined to be healthy-physically ... Yeah, I could have been much, much worse off.

Even if it doesn't save me from death in a way, I think jiu jitsu has made my life so much better for those reasons that I just mentioned. I really do love it. I love the art itself, and I love where it came from. I love being a part of the history, and of course making the future of jiu jitsu. Does that answer your question?

Ruby: Yeah, so it seems like they're taking their frustrations or life issues out on you and they may not even know it.

Ruby: Or they'll stop all of a sudden and start to change the directions of things. You're like, "Whoa whoa whoa, hold on."

Darby: Gotcha. In business, we have a saying ... "You don't have business problems, you have personal problems that are mirrored in your business." The same thing is true with your jiu jitsu. You don't have rolling problems or sparring problems. You have personal problems that are reflecting in your rolling. That's why you don't start off automatically being allowed to grapple at most gyms. You're not automatically allowed to live grapple your first week of training, your first couple of months of training, because nobody knows what you're bringing onto the mat with you.

I think everybody brings something different and you have your good, your bad, and your ugly walking onto that mat with you. It's a new experience, and I think when you're tested and somebody puts you in an uncomfortable situation and you start to feel the stress of somebody trying to choke you, somebody trying to ... It feels like they're trying to hurt you, even though they might not be doing that and they might have total self-control. What happens is you start to feel that pressure, and then you act out of instinct, and you draw on the things that are already existing inside of you. If your insecure in that moment, your insecurities are going to come to the surface. If you're angry in that moment, your anger is going to come to the surface. If you have a problem losing, if you have a problem tapping, even though someone's got your arm, you're probably going to get injured and that's probably going to come to the surface because you are taking what's already existing inside of you and you're bringing it onto the mat.

For us at our gym, that's why we bow onto the mat. It's because you're literally checking yourself at the door and saying, "This is why my ego's not allowed on the mat" or "Whatever problems I had coming into today, it doesn't matter once I start rolling." I think when you learn, not just to respect the mat, the place you train, and the gym, but [also] the person you're rolling with and yourself, it's twofold. You have to know yourself and you have to have the integrity and the self-confidence the self-awareness, to check yourself at the door and know, "Hey, this is me becoming a better person. When I go onto that mat, I'm going to be tested and I have to have the self-control to know how to stay calm and think through to solve these problems in a stressful environment, in a stressful situation, without letting all my crap determine the direction of this match.

The same thing goes for the other person. It's like, for you towards the other person is, you're bringing all that stuff and you can't just dump it all on them. You have to have respect for that person and understand that this is their journey, too. Then it can become a mutually beneficial thing, when both people come in with the mindset of, "I'm going to get better and I'm going to help other people get better today. I've got crap that I'm bringing onto the mat, but I'm not going to let that affect myself negatively or my partner negatively or this culture at the gym. It's not going to be affected negatively by that." That's a good question. I like that. 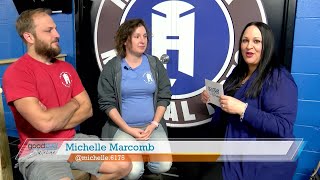